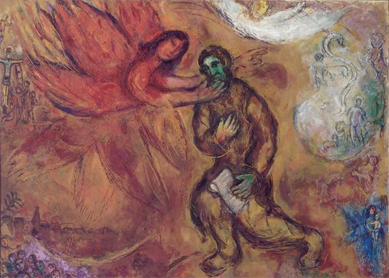 What does it mean to see God? We know that no one has seen God because the gospel tells us this (John 1:18; 6:46). Isaiah didn’t see God so much as his glory (John 12:41), but what he saw in this vision was life changing. Some may wonder why this isn’t the first chapter of the book. After all, the calling of a prophet should precede his message. The greater part of the first five chapters are poetry, setting the conditions that spurred God’s employment of Isaiah. There’s a literary genius to the structure, but we’ll not delve into literary criticism. Not only did Isaiah’s life change, but the makeup of Judah did too.

There’s a particular irony in Isaiah’s calling. He was given a vision of heaven’s court in the year King Uzziah died (6:1; 740 BCE). The irony is that King Uzziah was banned from the temple—a shadow of a heavenly reality (cf. Heb. 9:11–12, 23)—after he presumptuously entered to burn incense on the altar of incense—something only a priest could do. This specific altar was outside the holy of holies, and as close as one could get to the literal presence of YHWH. Uzziah was subsequently struck with leprosy and lived the rest of his life as a leper, banned from the temple. During his isolation, his son served as coregent, overseeing the affairs of the kingdom (2 Chron. 26:16–21). While the king was prohibited from the temple, Isaiah sees something greater than the temple—he sees God in heaven. This scene expresses the changing of an era. An age of stability has ended, and the ensuing problem of the Assyrian threat began.

What Isaiah saw was the actual temple—doorposts, smoke, altar, and burning coals. Yet, it’s the heavenly temple and not the one at which he worshipped in Jerusalem. The year of Judah’s king dying, Isaiah sees the king of heaven—seated on a throne, high and lifted up. He’s not in a palace, but a temple (v. 1). The reminder is that YHWH still reigns and is in control no matter who reigns and wars on earth. Isaiah seeing God as reigning, surrounded by hosts, was to reinforce to the prophet and Judah that despite threats on earth, God wars in the heavenly places against those evil forces (cf. Eph. 6:12).

Isaiah, next, sees seraphim. This is the only place they are mentioned, but elsewhere, the term is used in reference to serpents and their venom (Num. 21:4–9). The conclusion has been made by some that these angels were winged serpents of some sort. The Nehushtan was destroyed during Hezekiah’s reign (2 Kings 18:4) and may have very well occupied space in the temple when Isaiah received his commission. Next is the trisagion chanted by the angels—it is antiphonal and causes the foundations to shake. This reminds me of a passing car whose bass is so loud that your car or windows rattle. Such is the nature of their voices and praise. YHWH is one of the “hosts.” Other passages attest to God being surrounded by multitudes (cf. Deut. 32:8 [LXX]; Job 1:6–11; 2:1–6; Ps. 82; 1 Kings 22:19–23; Ezek. 14:4–5), but this might be better rendered “armies.” Isaiah would have understood it that way, and in the coming struggles with the Assyrians, it would have been significant (Is. 13:4; 24:21; 31:4).

Imagine for a moment seeing the most august scene ever. There’s the majesty of God, flanked by fiery angels from whose wings you can feel the breeze. They continually chant this chorus with such beauty that it sends chills down your spine. At the same time, their voices are so rich and powerful that the foundations quake. Not only do the words of their chorus strike you, but the performance of them is something you feel pierce your very being. Smoke engulfs the area, and it reminds you of what you’ve heard your ancestors saw in Sinai many centuries ago. The effect is terror. You pause from the awe of taking it in to the realization of where you are and what you’re like, and who you’re before.

‘Woe is me; I am  lost!” Why does he feel so? The ending of the passage tells us why, but not so much in English as in Hebrew. “The king, the LORD of hosts, my eyes have seen.” It’s vital to note here that the term used of Uzziah is the same used of God—hammelek. The death of the king threatens stability, but God is all the stability that Judah needs. Isaiah appears before God in a state of unclean lips among a people of unclean lips. In our present existences, no one can see God and live (Exod. 33:18–20; cf. Gen. 32:30; Judg. 6:22). This was what frightened Isaiah. He assumed the sins of the people as well as his own and believed there was no way to survive this. However, the very God whose holiness can consume the profane (cf. Lev. 10:1–2; 2 Sam. 6:6–7), can also cleanse. In similar temple imagery, one of the seraphim takes burning coal to cleanse the prophet, atoning for his sin. Isaiah need not fear. He is cleansed. He can remain.

Isaiah’s commission began with seeing God. Now, it turns to hear him. Isaiah readily accepts God’s commission, but the message he is to deliver will fall on deaf ears. The wonders that he’ll work will be seen by blind eyes. The hearts of the people are already turned against God, and Isaiah’s ministry will be unsuccessful in terms of people responding positively to it. When the prophet inquires how long this will last, we see that God has decided to judge Judah. It’s going to last until judgment comes. Why bother? God bothers because he cares. He bothers because he wants them to know that they have heaped up judgment on themselves, not only through Isaiah’s ministry, but even through all those who’ve come before him. Success here isn’t defined by how many people respond to the prophetic call, but how faithful the prophet is to God in delivering the message. Fidelity to God—that’s success.